“Imagine yourself in the middle of a sprawling field, sun glowing on your face, smoke drifting into the sky as the embers crack and hiss. Imagine being a part of a tightly knit group who are working hard to bring to life the most important day of someone’s life.”

The world of Heirloom Fire is one where culinary alchemy is coupled with an elegance that can only exist in nature.

Owner James Gop describes Heirloom Fire, headquartered on Route 41 in the rural town of Richmond, as “a sustainably-minded, fire-based catering and events company.”

But for Gop, the company he founded in 2015 is about more than creating a unique dining experience. He’s also looking to inspire clients and guests to think differently about foodways, food waste and sustainability outside the traditional idea of farm-to-table cuisine.

To do that, a majority of the elements of an Heirloom Fire event are either farmed, foraged or forged. Gop and his team forage in the woods weekly to build out the kitchen pantry, swapping in invasive species.

“We allocate three or four hours just to go out to get specific items in mind,” Gop said. “We have a goal of trying to identify three new species every time we’d go up so that we can then track it from the beginning.”

What is collected by hand is infused, dried or preserved as part of Heirloom Fire’s pantry.

Reducing food waste includes using preserving, pickling and preparing in unconventional ways. For example: butternut squash seeds are soaked, blanched and compressed into seed curd as a dairy-free cheese. The peels of that squash are dehydrated into a powdered seasoning for risotto.

As a fan of magic tricks and sleight of hand, Gop looks for the opportunity to continually surprise his guests.

“This one time we made chicken liver pate, but we encased it inside of a gelatin-based puree. So, like, it basically looks like an apple,” Gop said. “Then you cut into the side of it and it’s a pate!”

Gop’s creative drive did not start in the kitchen. His first oven wasn’t even used for cooking food, but for latex. As a teenager, Gop was interested in special effects makeup and mask-making. At 18, he ventured out to California to see if he could make it as a special effects artist. Unsuccessful, he returned to the Berkshires and took some time to figure out his next steps. He then joined the team at Guido’s Fresh Market, where he learned how seasonality impacts the taste of food.

His interests eventually turned to cooking, and he went to study at the Institute of Culinary Education in New York City. Working during the week at Guido’s, he would take the train down to New York City Friday night and awaken for school on Saturday at 5:30 am. After full weekend classes, he would head back to the Berkshires and do it all over again.

After culinary school, Gop worked at several Berkshire institutions, including Wheatleigh and The Old Inn on the Green. It wasn’t until he started working for Jeremy Stanton at Fire Roasted Catering that he began to find his passion for cooking food on an open flame.

Even the wood is locally sourced

Building up to an event, Gop is busy lining up food vendors.

“We try to source some local foods as closely in the area that we can, so the food is reflective of the region,” he said.

Sources need to be identified and lined up well in advance, as most of the cooking happens on-site. Even the wood is locally sourced, though it’s for environmental reasons. As deliveries come in, the team transfers everything over to bushel baskets and apple crates, so even the packaging matches the natural and elegant aesthetic the company creates.

The day of an event, the team arrives at the location at about 9 a.m. or 10 a.m. Gop and his team travel to each location with all the equipment they need contained in a single box truck. They survey the property, centering the kitchen near the closest water source, and start unloading and prepping for the day.

Hours later, when guests enter, the scene has changed: smoke hangs in the air and Gop, as well as his team, are impeccably dressed in jodhpurs and scally caps, as if they’ve just come in from a fox hunt. Aesthetic doesn’t start and end with uniforms. It’s an aesthetic that is carried out in everything they do, down to the smallest of details.

As the team is setting up the kitchen, all materials are transferred from deli containers to Mason jars and plastic flats to baskets. Guests will not find a plastic squeeze bottle on-site, and this is by design.

Gop wants every element of his events to surprise and delight guests as well as engage them in conversation.

“When people walk through an area that we’re in, I want them to feel like there’s immediately a story everywhere,” he said. “Almost every piece of equipment has a story, and there’s an opportunity for conversation.”

Whether that’s discussing the nonpredatory fish that’s cooking or how a dish was made, Gop’s goal is for guests to walk away from an event inspired to learn more. He wants them to know that working with him and his team that, any of his clients, they are making a difference by reducing the waste, cutting back on invasive species and overall raising awareness.

“Hopefully, we can influence something, make better choices, or influence them to do a little bit more research on their end,” he said.

Those looking to experience the magic of Heirloom Fire, but are not in the market for a wedding or private event, can attend a dinner put on by Field Ventures, a collaboration between Gop and Magdalena Mieczkowska of Magdalena Events.

Mieczkowska, an early member of the Heirloom Fire and Fire Roasted Catering, has worked over 100 events with Gop and is a regular collaborator. Putting on events quarterly, Field Ventures allows both creators to combine their talents and create a culinary event from the ground up.

Between events for both companies, Gop still has time to continue to innovate, dreaming up new tools to use or cooking methods to explore. That’s exactly where he wants to be.

“This gives me so much passion and fuels me. I really love what I do,” Gop said. “So, I’ve come to accept the fact that my personal life fits in around this.”•

Stephanie Gravalese is a freelance writer and photographer, writing mostly about food and travel. Her work has been featured in various publications including The Berkshire Eagle and Rural Intelligence. Follow her food adventures on Instagram at @stephanitaeats. When not tracking down the best food spots, she can be found in Pittsfield, Mass. 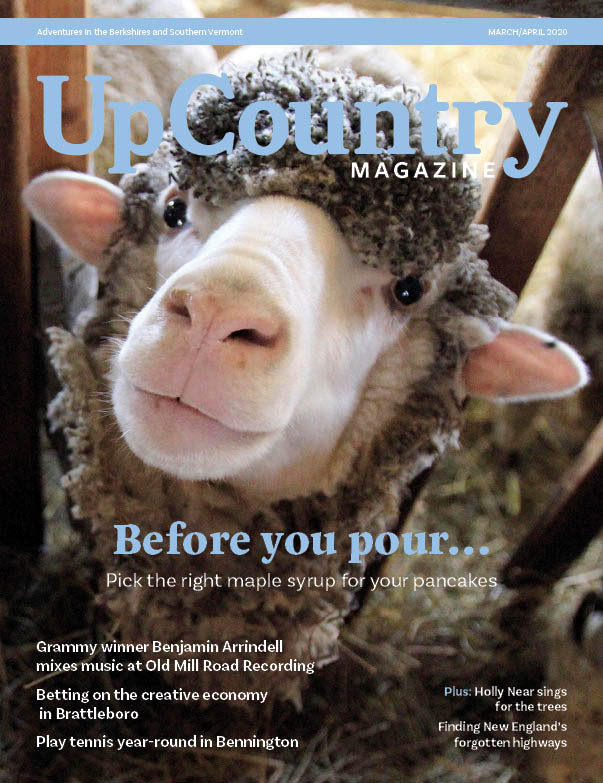