Whether you’re into “bouldering” — climbing boulders — or just looking for an interesting outing, ice age glaciers left behind plenty of humongous rocks in Massachusetts.

Christy Butler, co-author of “Rockachusetts: An Explorer’s Guide to Amazing Boulders of Massachusetts,” recently shared 12 of the best balanced, best split, most historic, perfectly profiled and creatively painted boulders in the Berkshires.

Perched about three feet off the ground, Balance Rock, in Lanesborough, is the king of Berkshire County boulders.

This balanced rock is a fine specimen that’s gained international acclaim thanks to its career as a postcard model — a gig that goes back more than 120 years.

Though technically not in Berkshire County, this erratic is just a stone’s throw (see what we did there?) away in Hampshire County. You may have already driven through the center of Middlefield, unknowingly passing this large boulder sitting only 200 yards from the road.

Big Rock, as with many large erratics, is often the center of community fun. During summer, “Middlefield Appreciation Days” include hiking tours to the rock.

This massive and humongous boulder, is located in the middle of the Dunbar Brook Trail in the Monroe State Forest.

Hikers and boulderers alike are no stranger to this giant. The trail boasts other large moss-covered boulders and a pristine brook that tumbles and drops 700 vertical feet in two miles, forming entrancing waterfalls, rapids and pools.

This obscure boulder in Savoy Mountain State Forest will make you say “Wow!” the first time you see it.

From North Adams, you’ll find this rock by turning left on a dirt road about 1 mile southeast of the Hairpin Turn.

The road ends with a small parking lot. From there, follow a well-defined, old woods road north for eight-tenths of a mile. The boulder will be on your left.

Sometimes, you can’t help but notice a rock, especially when it’s painted to look like a frog.

Found sunning itself in the middle of the Housatonic River, this frogs has been a traditional landmark since 1898 when Peter J. Tyler had a house painter named Amos Washington create the first frog.

Since then, it has been repeatedly repainted and recently moved into the river onto a concrete pad.

Jutting out from a shoulder of Lenox Mountain Road in Richmond, this boulder has got some real bite.

But don’t try to kill this shark, it has some serious community backing. Over the years, community members and artists have joined together to keep its jaws sparkly white with a fresh coat of paint.

Just off of the Quarry Trail at Lime Kiln Farm Wildlife Sanctuary, you’ll find this glacial erratic just hanging out among the trees. This boulder may seem out of place, but for many New England farms, having a large boulder like this was an asset. Often, farmers would use it for “boulder quarrying,” or hand-cutting boulders into chunks for construction, foundations or bridge abutments.

You’d have to be living under a rock not to have heard of, or seen, this classic “holding up the balanced rock” pose at Balance Rock No. 1 in Savoy State Forest.

Located just off Tannery Road (0.9-mile trek from New State Road) on the way to Tannery Falls, this rock is a popular photo op.

Located between North Pond and South Pond, Balanced Rock No. 2 is smaller than its bigger, more well-known sister boulder, but it still deserves some love.

This rock can be found adjacent to the Savoy Campground. Take the North Loop Trail for a tenth of a mile. The rock will be perched to your left and clearly identified with a sign that reads “Balance Rock.”

In the vast woodlands between Dalton up northward, The Prairie is an excellent example glacial striation, or the scratches or gouges cut into bedrock by glacial abrasion.

A very large area — about 250 by 250 yards, plus a smaller moraine nearby — remains isolated from development.

This site is well worth the afternoon effort for an adventurous discovery.

If you look closely, in the right light and at the right angle, you may see that this rock isn’t monkeying around.

This 8-foot rock bears an uncanny resemblance to the profile of a gorilla.

Located in Mohawk Trail State Forest, this 10-by-15 foot boulder rests on the side of the hill overlooking Cold River.

Find this rock off of Route 2 (the Mohawk Trail) near Black Brook Road.

Warning: You’ll have to bushwack up the side of the hill to find the path to this one, but it’s well worth it. 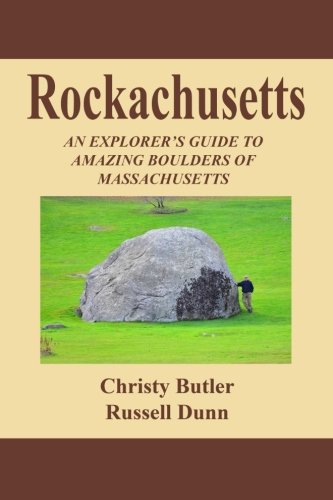 “Rockachusetts: An Explorer’s Guide to Amazing Boulders of Massachusetts” is available for purchase online at amazon.com.

4 thoughts on “12 ‘Must See’ Boulders in the Berkshires”