It seems silly to think that ski resorts once banned snowboarders from the slopes, but it’s true. Recently, thanks to the time machine that is the internet, I watched a Canadian Broadcasting Corp. news segment from 1985 about the “dangers” snowboarders posed to skiers.
“Uncooperative … Smart alecs.” was how one ski patrolman in the news segment (available on YouTube) described the snowboarders he had been kicking off of ski slopes. Opponents of snowboarding called it dangerous and wrote it off as a passing fad.

Before 1983, snowboarders were banned at all major ski resorts. But that changed in 1983 when Jake Burton Carpenter, of Burton Boards, convinced Stratton Mountain to let snowboarders have their day.

In 1985, when ski patrols in Canada and around the United States were chasing down renegade snowboarders sneaking onto ski trails to get their fix, Stratton and Burton were hosting the first U.S. Open Snowboarding Championships. (In 1985, only 40 out of some 450 U.S. ski resorts allowed boarding.)

Snowboarding is here to stay, and it’s in part because of Carpenter, the “godfather of snowboarding.” Sadly, this snowboarding legend, who lived and worked in the UpCountry, is no longer with us, having succumbed to cancer in November 2019.

This issue, we pay tribute to Carpenter and a few other inventors and innovators from the Berkshires and Southern Vermont, like Clare Bousquet and Fred Harris, who helped change the course of snow sports.

As we embark upon a new decade (and our fourth year of UpCountry), one can only dream of what absurd thing we’ll be chuckling about a few decades from now. Until then, we hope you’ll celebrate winter, in the here and now, with us. 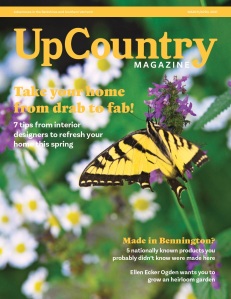