A warm and comfy Thanksgiving meal for those who need one

The week of Thanksgiving, Michael Roller and his staff at Samel’s Deli in Pittsfield won’t just be cooking up their usual fare. They will start peeling additional potatoes and chopping extra items. By Wednesday, they will have eight donated turkeys roasting and the gravy made.

On Thursday, all of it will get shipped in insulated containers to a place in Housatonic where, every day, flows the giving and receiving that is Thanksgiving. A free meal will be served at the Guthrie Center, the former Trinity Church, owned by musician Arlo Guthrie.

“It just feels really good to do something nice,” Roller said. “That’s all you really need.”

George Laye, the center’s general manager, would agree, especially on this holiday.

“We’re all about Thanksgiving here,” said Laye, who with staff orchestrates the free community meal for 150 every year. “It’s what we stand for here — helping folks. That’s every day for us. It’s in the blood of the whole mission.”

While the Guthrie Center also hosts a free community meal every week, the Thanksgiving meal is a tradition that found its feet there in the 1960s (then home to Alice Brock, owner of Alice’s Restaurant in Stockbridge) amid a truly iconic American tale of littering that includes a classic beatnik/cop run-in.

In 1969, the feature film “Alice’s Restaurant” — it’s based on the song and arrest, directed by Arthur Penn and starring Guthrie — forever etched the former church at the corner of Division Street and Van Deusenville Road into memory, just like the song lyrics.

The story, song and Guthrie’s vision have stretched into the decades since not only bringing other performers to this off-the-beaten-path venue, but also spreading love in the community and inspiring more of that giving spirit in others. In addition to hosting free community meals, the center also offers other programming, such as tutoring and nondenominational services.

But it’s Thanksgiving that gets the full Guthrie treatment. In addition to his traditional performances of “Alice’s Restaurant Massacree” — this year, he’s performing at the Mahaiwe Performing Arts Center in Great Barrington and at Carnegie Hall in New York City, a 52-year tradition that will end this year — Guthrie and his family often attend the community meal, though it isn’t about celebrity.

“It doesn’t turn into an Arlo thing,” Laye said. “It’s just another family that’s here, and so that’s a sweet thing.”

Laye said the free community meal has been served up here every Thanksgiving for 14 years. It’s a happy tradition that often sprouts more volunteers than the place can handle.

“We get a lot of regulars and people who just moved to town,” he said.

And this includes people who simply want to serve those people

“We’ve had calls from California saying that they wanted to come and volunteer.”

Laye and the few other staff organize it, and volunteers do the rest, including giving rides to people who need them.

“There are some people who really don’t have a place to go — like seniors,” Laye said. “It’s warm and comfy. We just want everyone to have a really good relaxed Thanksgiving Day like it’s supposed to be.”

Relaxation will happen later on in the day for Roller. His wife will put their own turkey in the oven. But he’ll still cook. But it might be too late for football.

Instead of relaxing, he’ll be at the Lenox Club, which hires Roller to do the Thanksgiving meal for about 75 members. But what he does for those who come to the Guthrie Center, he does out of love.

Usually, he’ll get everything donated by his suppliers, including the green beans, cranberries, potatoes, butternut squash, stuffing, rolls and those eight turkeys, about 22 pounds each. If he doesn’t get everything he needs, he’ll spring for it himself.

Roller and his staff have cooked the Guthrie meal for about 12 years, taking over from Roberto Flores, after he sold the Seven Hills Inn, where Roller did catering.

The food gets cooked up at Samel’s on Elm Street, and shipped hot down to Housatonic, where the legions of volunteers are ready and waiting.

Roller is already busy. He has a kitchen staff at Samel’s of about six to eight. He also caters throughout the county. He does about 20 to 30 weddings every year, runs the cafe at the Medical Arts Building, the Lenox Club kitchen and food service at Jacob’s Pillow in the summer.

All of this spells success. He is grateful and wants to show it.

“We’re really lucky here and doing well at Samel’s, and this is a way to give back to the community,” he said. “To acknowledge that we are as successful and happy and well-fed as we are.”

“They are absolutely the most wonderful people in the world,” Laye said of Samel’s.

Laye says it’s such a gift to give not only a meal and community, but the opportunity to have a cold turkey sandwich at about 10:30 p.m. on Thanksgiving.

“It’s a very important thing to me,” Laye said, noting that all attendees get leftovers to take home.

He pointed to others who donate, like Taylor Rentals, which supplies the tables and tablecloths.

“It’s really formal and wonderful and really homey,” he said.

And Taft Farms, around the corner, has donated pies in recent years and “has always been there for us.”

But what about music? “Sometimes,” Laye said. “If it happens, it happens. We don’t try to push it. But it’s kind of fun when it happens.”

For Roller, there will always be music on Thanksgiving.

“I always make a point to listen to ‘Alice’s Restaurant’ during the day,” he said.

Heather Bellow is the Southern Berkshires reporter for the Berkshire Eagle and a member of the paper’s investigative reporting team. She has two grown children and lives in Great Barrington.

1 thought on “A Guthrie Center tradition” 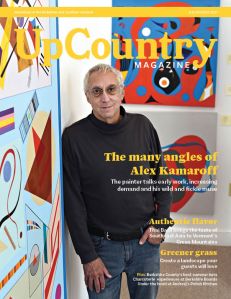