Ever since Vermont artist Wolf Kahn won the U.S. State Department’s International Medal of Arts earlier this year, the response has been nearly — but not quite — unanimous.

“Wolf Kahn is to Southern Vermont what Winslow Homer is to the coast of Maine, Georgia O’Keeffe to the New Mexico high desert, and Claude Monet to the French countryside,” says Danny Lichtenfeld, director of the Brattleboro Museum & Art Center. “Wolf’s depictions of our barns, fields, trees and hillsides form the prevailing visual impression of our area for people all around the world.”

Only one person so far has argued publicly with that: The artist himself.

“I’m not trying to paint Vermont,” he says. “I’m painting paintings, and it turns out people think they look like Vermont.”

It takes a special talent to smear pink, orange and purple oils and pastels on canvas and spark vivid thoughts of the Green Mountain State. That’s why, as Kahn prepares to mark his 90th birthday, the Brattleboro museum is presenting a major new exhibit of his work.
“Focusing on paintings from the last 10 years, this exhibition celebrates a modern master approaching 90 who is still actively engaged in studio life,” curator Mara Williams writes in the show’s introductory statement. “These are virtuosic compositions, symphonic in scale and complexity, at once original and a précis of the art historical influences of a lifetime.” 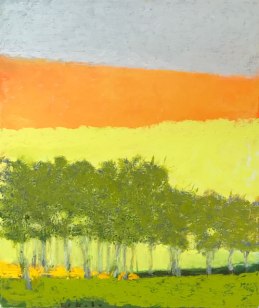 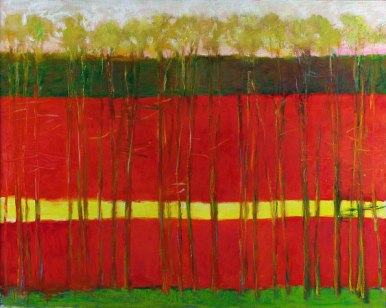 And an epic span at that. Kahn was born in Stuttgart, Germany, on Oct. 4, 1927, only to flee his homeland on a “Kindertransport” train that saved Jewish children before the start of World War II.

Emigrating to the United States by way of England in 1940, Kahn graduated from New York City’s High School of Music and Art, served in the Navy and, under the GI Bill, studied with renowned painter Hans Hofmann before completing his bachelor’s degree in a single year at the University of Chicago and launching his current six-decade career in 1951.

From now to Oct. 8, Kahn also is exhibiting in Brattleboro, where he has spent each summer and fall since 1968, when a friend drove him around the region, only to recognize and follow a real estate agent’s vehicle to the hillside farm the artist soon made his second home.

Kahn remembers how the local newspaper introduced him through an interview.
“The first question was, ‘How many paintings do you do a year?’ I said maybe 100. The second was, ‘How much do you charge?’ I said a couple of hundred bucks. The next time I had to have my barn re-shingled, all of a sudden, the price went up.”

Kahn nevertheless thinks highly of his neighbors, be they the dairy farmers who live next door or their cattle that graze his land.

“I’ve gotten to feel like I’m no longer just a flatlander — I belong here and have a good time.”

Critics are another matter. The late art historian Robert Rosenblum, visiting Kahn’s studio, once told the artist: “There is nothing here that Monet hasn’t done already.”
The New York Sun, for its part, wrote: “Can art this ingratiating be taken seriously? The question dogs critical appraisal of Wolf Kahn. His popularity with a broad public and the unclouded loveliness of his landscapes give rise to grumblings that he has not earned his keep.”

Then again, the latter newspaper folded in 2008, while Kahn traveled to Washington, D.C., this January to receive the U.S. State Department’s International Medal of Arts for sharing his paintings with American diplomatic outposts worldwide.

An interest in the world 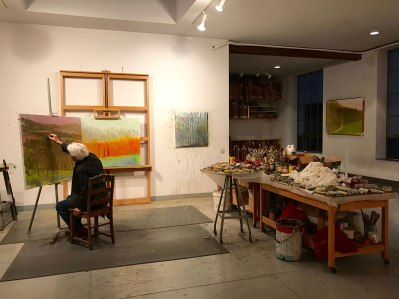 How does the artist describe his work?

“I try not to,” he says. “I never want to look at it the way an outsider would. There’s a certain mystery in making paintings, and I don’t want to destroy that. What people think art’s about is not always what it’s about. Lately I’ve decided my painting isn’t about describing places or things, it’s much closer to just an expression of enthusiasm.”

He lives to convey it.

“I’m painting more now than I ever did before.”

And increasingly, to confound it. The show’s introductory statement notes “his preferred applicator is a cheap stiff-bristled brush, the kind do-it-yourself homeowners buy and toss instead of cleaning.”

“Goes with the color of my hair. Actually my hair now is white. But gray allows you to do a lot of things that bright color doesn’t. It’s a more austere way of going about the world.”
Not that the artist is monochromatic. He still wear hues as playful as his personality — albeit while staring seriously at a blank canvas.

“I’m a bit of a workaholic — I don’t stop,” the soon-to-be nonagenarian says. “People ask me, ‘You must be having a wonderful time.’ I say, ‘Sometimes I do, but more often I don’t because each painting has to go through stages. It’s not an easy profession. You’ve got to have a lot of perseverance.”

“Bad habit,” Kahn concludes. “I don’t know how to do anything else very well.”