When Sophie Caldwell approaches the starting line of World Cup events for the SMS Elite Nordic skiing team, she’s continuing a family tradition that started with her grandfather John Caldwell borrowing a set of wooden alpine skis from his sister for a high school meet about 70 years ago.

Now, Sophie, of Peru, Vt., is a third-generation U.S. Olympic athlete, having placed 6th in the free-style sprint at the Sochi Games — the best-ever finish for an American in that event — and the first American to win a classic sprint in a World Cup race, in January 2016. She’s the daughter of Sverre Caldwell, who was her coach at Stratton Mountain School and piloted the U.S. Nordic team in Calgary in 1988. Her cousin Paddy, of Lyme, N.H., is the son of four-time Olympian Tim Caldwell and an NCAA champion at Dartmouth.

And it all goes back to that fateful moment when John Caldwell was called upon to ski cross-country for Putney School, where his father had taken a job as business manager in the 1940s.

One might think Caldwelll’s house in Putney would be a shrine to the family Nordic skiing heritage, having accomplished skiers in the family and students at Putney School such as Bill Koch who went on to win Olympic medals.

But that’s not so.

Other than a few hints here and there — photos of his grandchildren racing, a Charles Schultz original drawing of Snoopy in cross-country skis that he drew for a U.S. team patch for the 1968 Grenoble Winter Games — it could be mistaken for any Vermont farmhouse.

But as much as Caldwell doesn’t profess much use for tokens from his decades of involvement in Nordic skiing, he’s an engaging storyteller.

“My junior year of high school we went to the state meet and needed a cross-country team,” Caldwell recalled in a conversation at his kitchen table. “Our coach didn’t know anything about cross-country and we didn’t have any cross-country races. But you had to score four people.

“So I got my sister’s skis, which were wooden alpine skis with cable bindings. I expanded the binding to fit my jumping boot and galloped around the course. And I said, ‘This is pretty good.’ We qualified for the New England high school championships and I figured I’d better start training.”

It wasn’t until he arrived at Dartmouth that John Caldwell had his first pair of purpose-designed cross-country skis.

John Caldwell graduated from Dartmouth in 1950, skied for the U.S. Nordic team in cross-country and Nordic combined — skiing and jumping — at the Oslo Games in 1952, and settled into a teaching and coaching, first at Lyndon Institute and then at Putney School. Later, he coached the U.S. ski team through four Olympic Winter Games, from 1960 through 1972.

The book? That was another series of coincidences, as Caldwell explains.
In his first year at Putney, Caldwell and his wife were renting a cabin from publishers Stephen and Janet Greene, who asked one day if there were any books about cross-country skiing. There weren’t, and Janet Greene asked Caldwell to write one.

“I’m told it sold the various editions have sold over 500,000 copies,” Caldwell says.
Published in 1964, “The Cross Country Ski Book” quickly became a go-to reference for Americans wanting to give the sport a try. It went through eight editions, the final one in 1987. 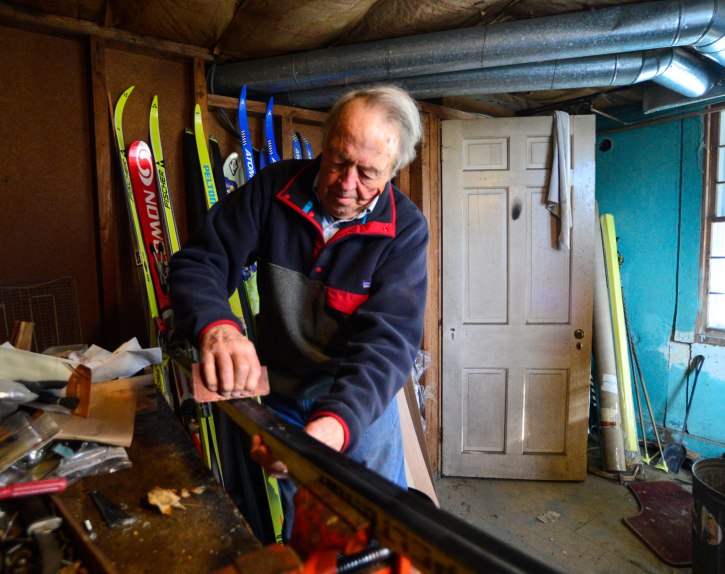 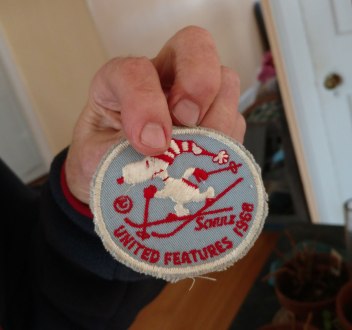 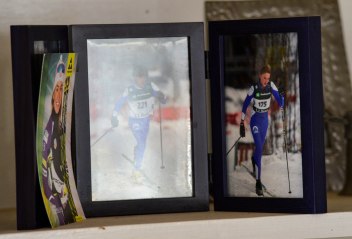 On skis at an early age

He and his wife Hester “Hep” Caldwell have been married for 64 years. The couple had four children — Tim, Peter, Sverre and Jennifer — and as Sverre Caldwell recalls, he and his siblings were all on skis by the time they could walk.

“We all started skiing very early, when we were 1 or 2,” Sverre Caldwell said. “Through high school, we all did four events” — cross-country, slalom, giant slalom, jumping — “it was just something that we did growing up in Vermont.”

The children knew their father was a U.S. Ski Team coach and that he had written a book, but it didn’t come to mind that they were inheriting a family legacy, Sverre Caldwell said.
“While we grew up, Putney was a hotbed for cross-country skiers so we just figured that we were doing the normal stuff. It didn’t seem like some great legacy. Skiing was something fun that we all did.”

Sverre followed his father into coaching, guiding the U.S. Nordic team at Calgary in 1988. He’s the coach at Stratton Mountain School, where he has placed 15 skiers on the U.S. Olympic team.

As a coach, Sverre Caldwell has applied what he’s learned from his dad, even when it was his turn to coach his own daughter at SMS.

“Coaching Sophie was always fun. She grew up with a strong group of peers and they all worked well together,” he said. “It was never stressful because we always try to look at the bigger picture. Have fun, work hard, learn as much as you can and see what happens.
Sverre said his favorite quote from his father is “It is all practice until the Olympics.”
“I think our dad was good at doing this — try to create a culture of skiing and see what happens,” Sverre said. “That is what I try to do: make cross-country skiing cool.”

While the Caldwells might be known as Nordic skiing’s “first family” in the U.S., that legacy is not a motivating factor for Sophie, she said.

“I think I’ve always been aware of my family’s legacy in skiing, but I’ve never felt that it’s added pressure to my career, it’s more of something I’m proud of,” she said. “My family loves the sport of Nordic skiing and is very involved, but they stay involved in a very positive and healthy way. I love swapping stories with my grandpa about how ski racing used to be and what it is now.”